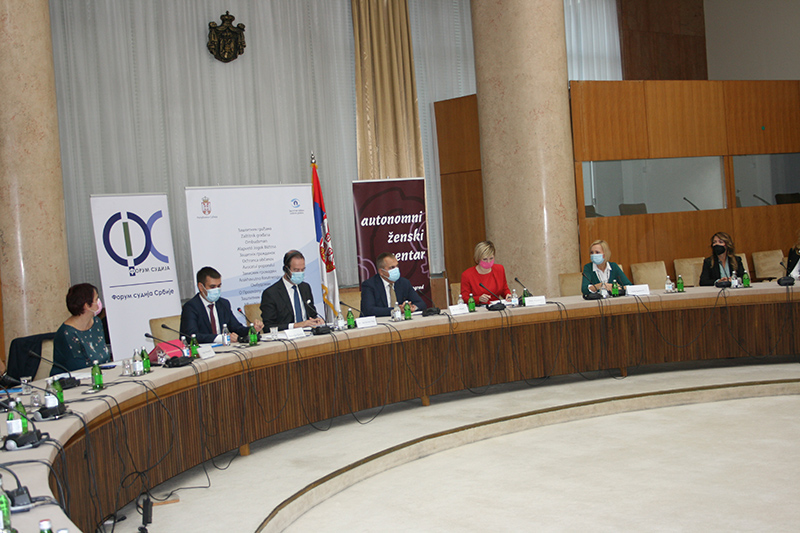 The Protector of Citizens (Ombudsman) and the Autonomous Women's Center, with the support of the OSCE Mission to Serbia, conducted an in-depth study on the implementation of the Law on Prevention of Domestic Violence in the City of Belgrade, which was publicly presented at the Round Table on October 8, 2020 in Belgrade. A recording of the presentation is available here.

The research, which analyzes the actions of the competent authorities in the system of protection of victims of domestic violence, is the first of its kind and was conducted on the basis of submitted records of guardianship authorities, copies of minutes from the Coordination and Cooperation Groups, as well as individual protection and support plans designed at the meetings of the groups for coordination and cooperation in May 2018. The results of the analysis were compared with the opinions of representatives of all departments of the City Welfare Center in Belgrade presented during the focus group discussions and published in the Ombudsman’s Special Report on the work of the groups for coordination and cooperation in the area of the City of Belgrade.

The results show that the implementation of the Law on Prevention of Domestic Violence in the territory of 17 municipalities of the City of Belgrade, both in terms of the number of cases discussed monthly at the meetings of the Coordination and Cooperation Group (from 3 to 104 newly registered, 1 to 106 current and 2 to 14 emergencies), as well as in terms of the number of meetings held (from 1 to 6) and their duration (from 45 minutes to 5 hours) is uneven. Three Groups considered only newly reported cases, while nine Groups also considered ongoing cases and five Groups also considered extraordinary cases. These data showed that the workload of professionals participating in the work of the Group was different in relation to how they approached the implementation of the Law, i.e. whether they understood the intention of the legislator who gave them a large and important role to coordinate and check the work of all professionals involved in providing protection and support to victims.

Another positive development is that 16 Groups developed individual protection and support plans for victims, but the Group's decisions on when and how the plans were adopted differed. They were made either at the discretion of the Group (7), in each newly reported case (2), only in cases where a medium and high risk of recurrence of violence was assessed (6) or only when a high risk was assessed (2). The work of the Group also differed in relation to the total number of individual protection and support plans for victims made on the prescribed form (from 0 to 92). A more detailed analysis also established that the two Groups recorded the plans only in the minutes, and not in the prescribed forms, and that two more Groups had more recorded plans in the minutes than they decided to enter in the form. In this way, a total of 495 individual protection and support plans for victims were developed (in 59% of cases considered), of which 301 plans in newly reported cases, 183 in ongoing and 11 in emergency cases.

The research also made it possible to see what the content of the adopted plans was and confirmed the allegations of the representatives of the guardianship authorities that the largest number of orders in the plans are issued to the Welfare Centers. The data showed that in almost every newly reported case in which the Plan was made (90%) the Group gave the order (s) to the WCs (in 250 cases) or the Welfare Center itself undertook to do something, while the orders of the Police and acting deputy Municipal Public Prosecutors were given in only a fifth of cases. Orders in current and emergency cases in almost half of the cases (49%) contained orders to acting deputies of the Public Prosecutor's Office to take certain actions (90), in slightly less than half (47%) orders of WCs (85), while only four Groups were given orders by Police (40).

The obtained data confirm that the Law on Prevention of Domestic Violence has improved multisectoral cooperation of all bodies in the protection system, but also that in relation to the number of reported cases and the time that needs to be set aside to consider the cases as a whole and make appropriate plans, there is a lack of staff. and technical capacities, harmonization of other Laws and bylaws, primarily related to the organization and manner of work of guardianship bodies, as well as clear instructions and guidelines of state bodies that should monitor the implementation of the Law. Therefore, the Protector of Citizens once again pointed out to the Ministry of Labor, Employment, Veterans and Social Affairs and the Ministry of Finance the fact that the Welfare Centers lack a sufficient number of skilled workers, and reiterated the need to adjust the number of skilled workers as much as possible to the number of cases of violence and cases of child protection.

The presentation of the report was organized within the project "Effective Policies and Harmonized Practices in Providing Support and Assistance to Victims of Domestic Violence" conducted by the Autonomous Women's Center, the Protector of Citizens and the Forum of Judges of Serbia, and supported by the Ministry of Foreign Affairs of the Kingdom of the Netherlands.