I Can Say No graffiti in high schools in Serbia 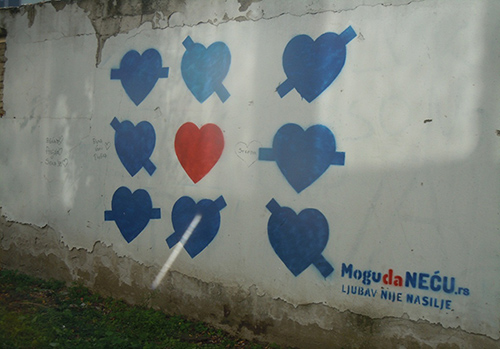 Novi Sad, Medical School "7th of April"Within the campaign "I Can Say No - Love Is Not Violence!" graffiti with the same message and blue and red hearts were painted by young people in 17 high schools and 2 primary schools across Serbia.

Within public actions organized by the youth with the support of women’s organizations in order to independently and authentically convey the message on the unacceptability of violence in partnership relations, and at their insistence, the Autonomous Women's Center sent letters to all the schools with which it cooperates within the project "Zero Tolerance for Gender-Based violence" with a request for approval for graffiti drawing. Most schools recognized the need of their pupils and gave the initial approval for graffiti drawing, with some of the actions scheduled for the spring of 2018. Those schools that could not approve because the buildings are under the protection of the state, gave the permission to draw the graffiti on the ground in the schoolyard or on canvases that would be placed in the school hall. 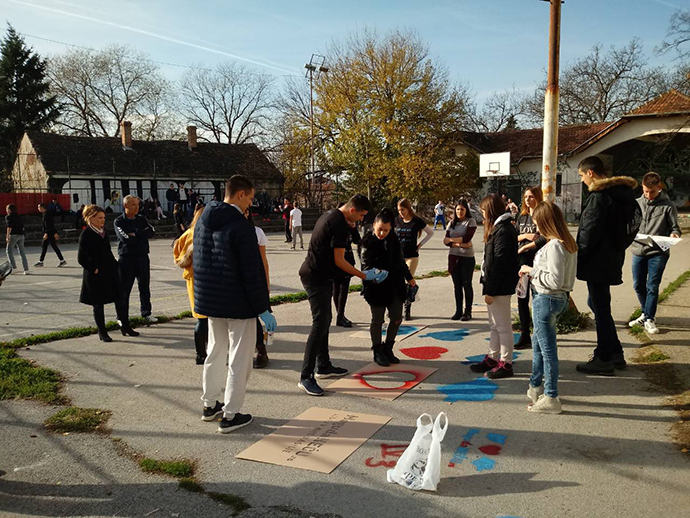 The action of drawing the graffiti has proven to be a good example of working with young people during which they express their own creativity, and at the same time send a strong message to girls - I can choose not to tolerate violence, as well as to boys - I can choose not to be violent. Given that graffiti was shown to be an attractive form of creative expression for young people, with these actions, they were able to enjoy the spreading of messages against violent behavior that attracted a considerable number of their peers who expressed their desire to join the actions. 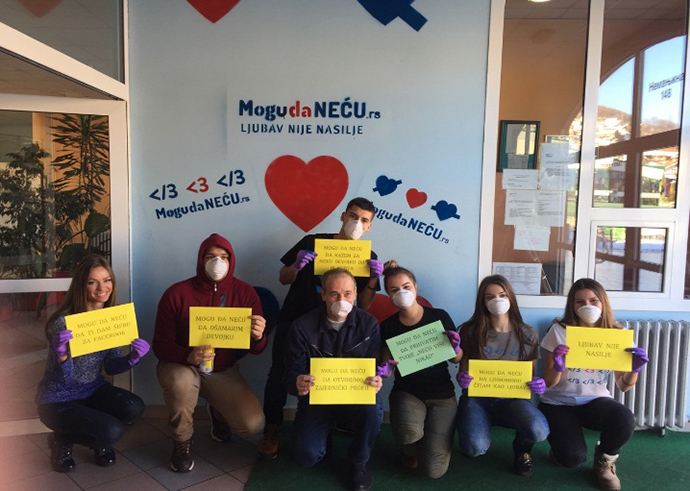 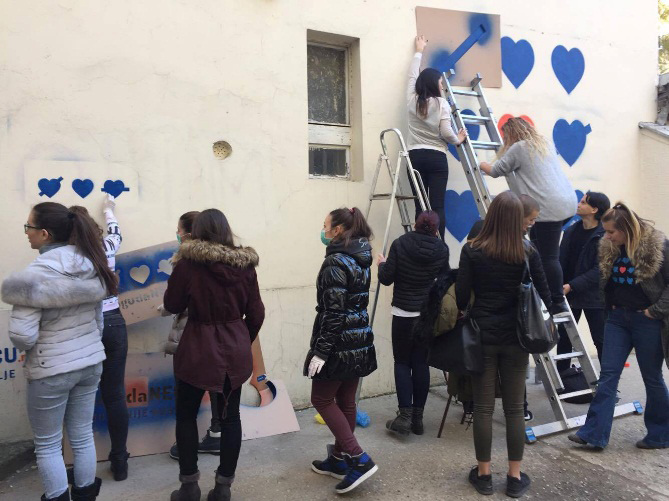 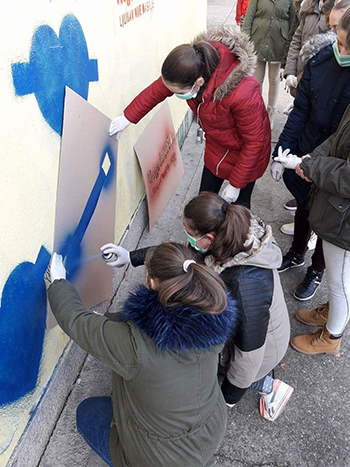 Crepaja, Elementary School „Sava Žebeljan“Considering that the local media mostly accompanied the graphic arts campaigns, and that they were promoted through "I Can Say No" on social networks at TeenTalk, an event that once a year gathers more than 400 high school students in the Youth Center in Belgrade, the Autonomous Women's Center then started to address elementary school students as well as young activists from smaller towns that are not covered by the Zero Tolerance project. After that, same hearts were painted in a primary school in Crepaja, at the initiative of an activist of the Youth Organization Crepaja and with strong motivation of the director, teaching staff and pupils and students.

"I do not think violence can be eradicated, but if we talk about it, we can influence its reduction. Violence must not be silenced and violence is not shame for the one who’s experiencing it, but for the one who’s an abuser. This action is important for young people in my local community because it sends the message that, as girls and women, we have the right to fight for ourselves, but also for others. And tells men to protects and defend that right. As I said, everyone is happy with the action and we all had a nice time "
Dragana Kokora, Youth Organization Crepaja

The second elementary school where graffiti was drawn is in Tutin, by their initiative, after seeing the walls of gymnasiums and technical schools adorned with the blue and red hearts! 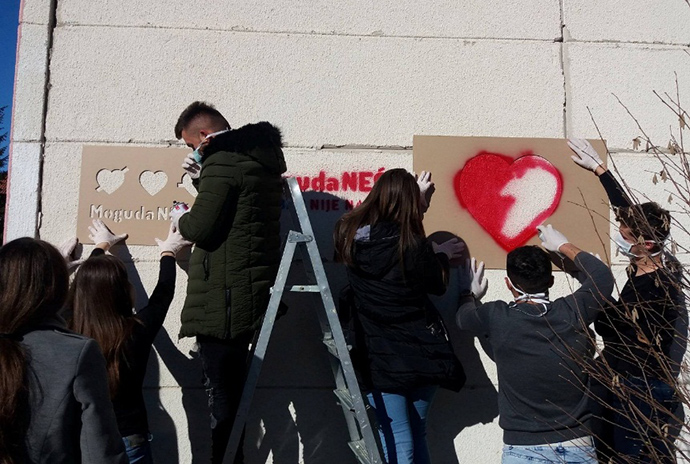 "I have a friend who suffers violence, allowing her boyfriend to beat her, thinking that if she remains alone, she’ll be unhappy. We all warn her that this is bad and that it doesn’t need to be like that, that she doesn’t have to suffer it, but she still remains in that mindset and relationship. I’d like to tell all my peers, all girls in general and all women that they don’t have to do this, they shouldn’t suffer any kind of violence because that isn’t real happiness. Whatever happened, get out of it, you don’t have to suffer it!"
Anastasia Mandić, student of the Medical School "7th of April" in Novi Sad 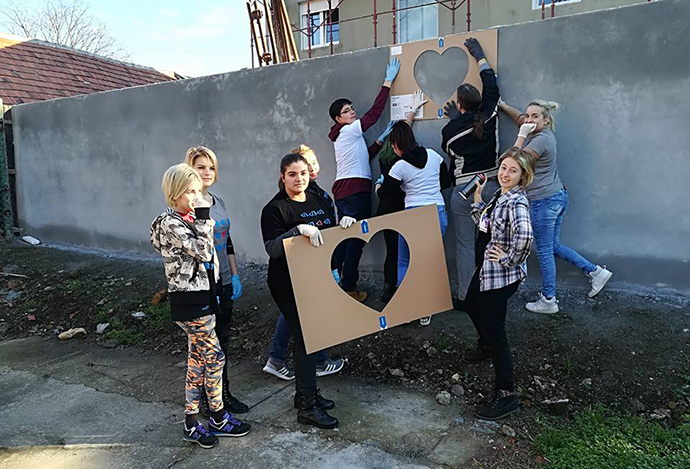 "I think that girls need to get in their heads that they’re not the main culprits for enduring violence and should start from themselves and then seek the help of others, those who are more professional than them. We need to change this mentality in which we live and realize that it’s not normal for a man to hit a woman and that a woman is not the main culprit for suffering violence."
Jovana Marić, student of the Medical School "7th of April" in Novi Sad

In the coming period we expect more actions of drawing graffiti in schools and public spaces!

The Autonomous Women's Center, in cooperation with local women's NGOs, implements activities with high school students in several cities in Serbia with the aim of improving the safety of young women and girls and protection against gender-based violence. Part of these activities relates to the implementation of workshops with girls and boys and the joint planning of school and public actions of young people to raise awareness about the causes, forms and consequences of gender-based violence. Based on a proposal by young people, an initiative was launched to draw graffiti against violence.