The second phase of the campaign POTPISUJEM.org carried out by the Autonomous Women's Center and partner organizations is committed to the full implementation of Council of Europe Convention on Preventing and Combating Violence against Women and Domestic Violence, which the National Assembly of the Republic of Serbia confirmed on 31 October 2013, and which will on 1 August 2014, enter into force at the level of member states.

The campaign is targeting decision-makers at the state and local level, who are required to take all necessary measures so that the standards of the Council of Europe Convention on Preventing and Combating Violence against Women and Domestic Violence become an integral part of the laws, policies and services, and also part of the actions of all relevant institutions (police, social services, prosecution and judiciary, health and education institutions, associations of citizens and the media).

The focus of the campaign at this stage was placed on five themes:

Autonomous Women's Center and partner organizations, in cooperation with the Women Against Violence Network, invite citizens across Serbia to support the campaign with their actions, primarily by sending postcards with the message of the campaign on addresses of the relevant decision makers.

The campaign of Autonomous Women’s Centre and partner organisations is dedicated to the ratification and full implementation of the Council of Europe Convention on Preventing and Combating Violence against Women and Domestic Violence.

The campaign is aimed at informing citizens about the content of the Convention. It needs to influence the awareness of the entire society, every individual, that violence – any form of violence – is not the right way of solving problems. The campaign informs citizens about the obligations the country has assumed by ratifying the Convention, which includes the comprehensive protection of women and violence prevention, prosecution and punishment of perpetrators of violence, and an effective and efficient system of monitoring the implementation of the Convention provisions.

Besides partner organisations, nearly 30 women’s organisations from Serbia, organised in the Women against Violence Network participate in the campaign. The campaign will run continuously from November 2013 to November 2014 (see Calendar of Events), with a focus on specific issues and topics. 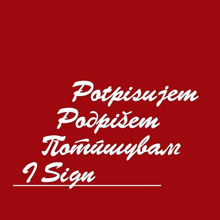