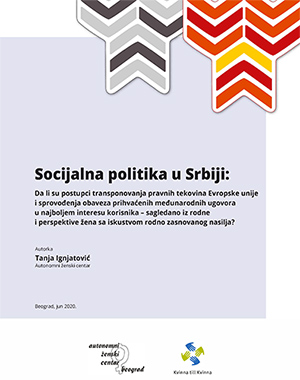 Autonomous Women’s Center presents a study on social policy in Serbia, from the gender perspective and from the perspective of women with experience of gender-based violence. It is a presentation of activities aimed at transposing the acquis communautaire of the European Union into the legislation of the Republic of Serbia, from the recently adopted Action Plan for Chapter 19 - Social Policy and Employment. The analysis focuses on four areas: social inclusion, social protection, prohibition of discrimination and equal opportunities.

The study presents an assessment of the situation and recommendations of relevant international bodies, as well as a review of the situation regarding the processes and outcomes of amending laws and proposing strategic documents, in order to be harmonized with the acquis communautaire. In addition, a summary report was provided on the interventions suggested by Autonomous Women’s Center (in the period 2017-2020), with the aim of influencing changes in gender and protection policy for women with experience of violence, which would improve the position of women. Moreover, the development processes of social protection services in the community were commented, with special emphasis on support services for women with experience of violence, showing the establishment of the “national SOS helpline” as an illustration of what could be called an example of a “captured state”.

The Republic of Serbia has not yet opened the negotiating Chapter 19 - Social Policy and Employment. In the conclusions of our study, it was pointed out that based on several sources, it can be concluded that the efforts made by the state in the considered areas do not lead to an improvement in the situation. At best, “some progress” has been made, most often in passing laws or strategic documents, but there are a number of non-compliances with standards, concerns about the implementation of regulations and strategic measures, and a serious lack of up-to-date information. At the same time, the reports and recommendations of the relevant international bodies have insufficient or no impact on the processes and outcomes of adopting legal and strategic solutions.

All proposals are gender neutral or based on untrue statements that no gender differences have been identified in areas such as poverty or social inclusion. When it comes to protection and support services for victims of gender-based violence, the sources indicate that their number is extremely small, as well as the fact that there is no up-to-date database on available services, their quality and effects.

The processes and outcomes of amendments to the laws show that no analysis of the effects of the reviewed options on society has been conducted, especially on multiply marginalized groups. Moreover, contrary to the rules, there are no public hearings, their results are not available, and there are no explanations for the adopted and rejected proposals. In some proposals, the reduction of the attained level of rights has been registered, while in some there is direct discrimination of citizens, i.e. women. The similar thing occurs when it comes to creating the necessary strategic documents in this area. However, their biggest shortcoming is that the planned budget funds are generally inadequate, or the cost structure is inappropriate, and it is often stated that no additional budget funds will be needed to implement the planned measures.

There are no recommendations at the end of this study, as would be expected, because in the context of the described arbitrariness of the authorities, any recommendation would be superfluous.

The study, written by Tanja Ignjatović, can be downloaded in Serbian HERE