With the opening of the exhibition "Speaking Out" by War Childhood Museum from Sarajevo in the Endzio hub in Belgrade, on October 2, 2021, the Youth Initiative for Human Rights opened a Thematic week dedicated to the fight against sexual violence in war. In addition to the exhibition within the thematic week, panel discussions, book promotions and film screenings were organized, in order to remind the public in Serbia of the problem of sexual violence in the war and the needs of survivors. 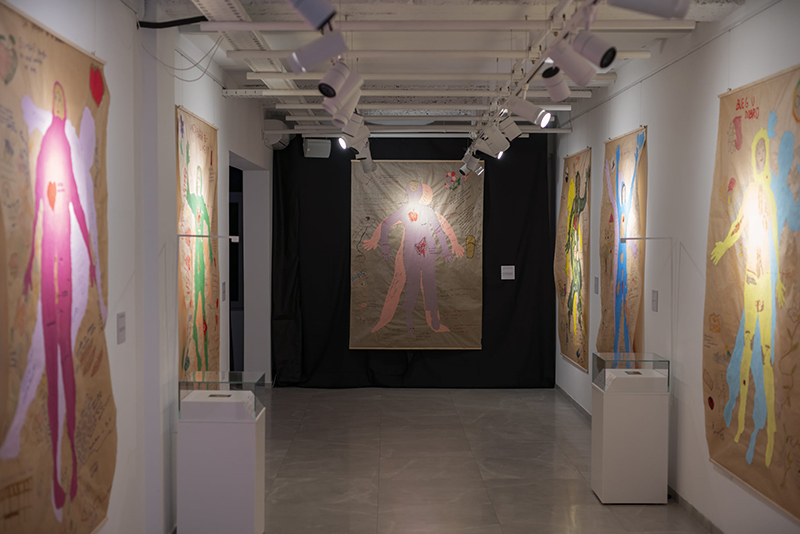 Through personal stories, exhibits and excerpts from video testimonies, as well as works created during the body mapping workshop, the exhibition "Speaking Out" shows the experiences of women survivors of sexual violence in war and children born of the war in Bosnia and Herzegovina. "At the exhibition, you can see 12 maps of life, bodies of brave, courageous and beautiful women who decided to speak out and share their experiences with us. You can also hear video testimonies of some of them, as well as video testimonies and personal stories of children born because of the war. I hope that together we will learn something from their experiences and not allow war sexual violence to continue to be used as a weapon of war, "said Amina Krvavac, executive director of the War Childhood Museum.

The opening of the exhibition was also attended by women whose works were exhibited. "As Amina said, you will see here our works, our stories, our life before the war, our life in the war. Life in the war is woven into two sentences because there was not much to show but the suffering and pain we experienced, but thank God, we also survived. Today we stand bravely, proudly, in the heart of Serbia. In the heart, where, unfortunately, the great evil came from, "said Midheta Kaloper Oruli, one of the survivors.

Ajna Jusić, the president of the Forgotten Children of War Association, the daughter of one of the women whose work was exhibited, who was born of the war, said: "I had the right to choose different paths, maybe some negative ones, maybe hatred paths. But I chose the path my mother taught me. It is the path of humanity. The path of what we as human beings must understand - that there is no person who wants to survive this and that we will not be good people if we don't care and let someone else survive this.”

You can see the introductory speeches at the opening of the exhibition at this link.

Good evening, everyone, today I am both proud and very emotional. I am proud not only of myself, but of all these wonderful ladies who participated in this workshop. We are proud because life really has strange paths. From ’92 to ’95, some of us, whether selected or targeted people, we, the women in Bosnia and Herzegovina, experienced the greatest torture. I am proud because Serbia has such wonderful young people and brave women who are with us here tonight, who are with us in Bosnia when we mark our dates, and that is a bright spot for us at the end of the tunnel.

As Amina said, you will see here our works, our stories, our life before the war, our life in the war. Life in the war is woven into two sentences because there was not much to show but the suffering and pain we experienced, but thank God, we also survived. Today we stand bravely, proudly, in the heart of Serbia. In the heart where, unfortunately, great evil came from.

From our works, our lives, and bodies, you will also see our messages. I will be overjoyed that this exhibition is visited by many people, especially young people, to see what our messages and wishes are. Our desire is only justice - to achieve justice, for many perpetrators who have not yet been punished to be punished for their misdeeds. If someone from the people committed a crime, we do not condemn the whole nation, we condemn the perpetrators. This is our great wish, and we hope that, while we are alive, we will experience justice and that this exhibition will experience not only in Belgrade, but also in other cities, and maybe even throughout the region ... Maybe it is a little difficult word - success. But we must have success, and our success is justice. 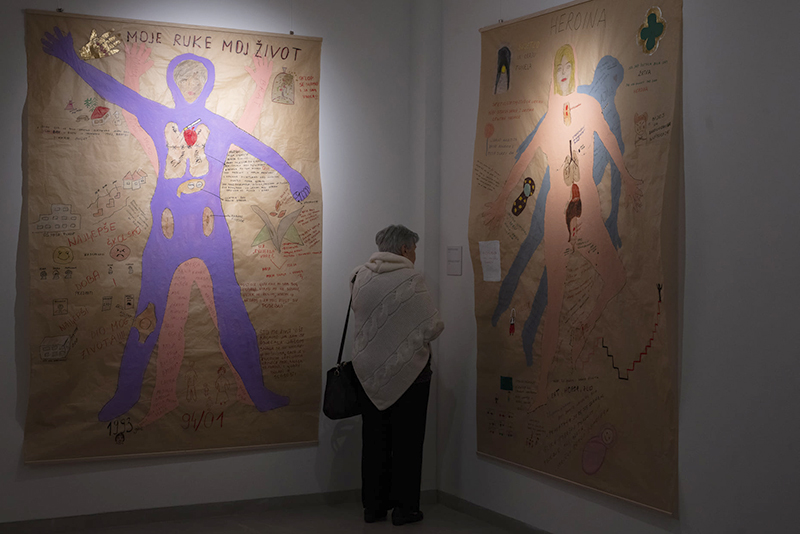 Good evening, my name is Ajna Jusic. I want to say that I am also very emotional, and I have a great deal of trepidation because all the words that Midheta has now uttered about the weight of the whole process I feel the most today. I want to tell you that all these drafts, these maps, are essentially lessons that we must leave to future generations. These are lessons that come from those lives that survived the worst, but did not turn to the worst, did not allow, and even now do not allow someone else to survive what they are.

I am 28 years old and 28 years ago I came into the world as a result of something very difficult, the worst my mother has survived. My mother is a heroine, and all my mothers are heroines who are with us today. In 28 years of various dreams, children's, girls', from all my mothers, and from my mother, I learned that good should be fought for, and that evil must not be transmitted, and that violence must not be transmitted. We must convey humanity, empathy, solidarity. I think that this event today here in Belgrade shows that we, together with the mothers, as their children, learned those best lessons.

I had the right to choose different paths, maybe some negative ones, maybe hatred paths. But I chose the path my mother taught me. It is the path of humanity. The path of what we as humans must understand - that there is no person who wants to survive and that we will not be good people if we don't care and let someone else survive.

In the spirit of solidarity, I must say that I am very proud that we showed those stupid politicians that all the national and political barriers that are set today between our countries, yet we as good people with our empathy and solidarity manage to overcome it.

Thank you for being here, this is for us, as Midheta would say, a huge success. We are very proud to welcome you to Belgrade, to always welcome you to Bosnia and Herzegovina. Thank you and I hope that from this exhibition you will understand that it is true that our mothers survived the worst, but that it was very painful to survive all that after that. But if you turn around now, you will see the stories of twelve heroines because they stand, they have survived, and they are fighting so that no one will ever survive that again. Thank you for being there to support that.

As part of the Thematic week, a screening of the film "For Those Who Can Tell No Tales” directed by Jasmila Žbanić was organized, as well as the promotion of the book "Women in Occupied Serbia (1941-1944)" by Ljubinka Škodrić. The discussion with Ljubinka Škodrić was led by Miloš Urošević, Women in Black activist, and the focus of the conversation was on the position of women in the Second World War and, especially, on the problem of sexual violence they experienced.

On the third day of the Thematic week, a discussion "The war continued by other means - where is the anti-war resistance today?" the panelists were Ljiljana Spasic, peace activist from Pancevo, Gizela Štanjo Tot, journalist from Madjar So and Andjelija Vucurevic, a peace activist from Novi Sad. The discussion was moderated by Staša Zajović, Women in Black activist. Panelists discussed the process of transitional justice in Serbia, obstacles to achieving it, unfulfilled goals, and responsibilities of civil society. The video is available at this link.

The next discussion entitled "The problem of sexual violence in the war in Serbia from the point of view of institutions and the public" was preceded by a screening of the film "Do you remember me in slavery?" by Ana Manojlović (Radio Television of Serbia). In addition to Ana Manojlović, Divna Prusac, a journalist from the Independent Association of Journalists of Vojvodina, also spoke at the panel, and together they offered answers to questions about how the media can influence the culture of memory and responsibility, and the fairer attitude of society towards sexual violence in war. Along with them, Ivana Žanić, director of the Humanitarian Law Center, spoke about criminal proceedings for these crimes before national institutions, emphasizing the problems of misogyny, nationalism and misunderstanding of the trauma of sexual violence within these processes. The conversation was led by Sanja Pavlović, an activist from the Autonomous Women's Center. The video is available at this link.

On the last day of the Thematic Week, October 8, activists of the Youth Initiative for Human Rights and the Autonomous Women's Center organized a celebration of the 30th anniversary of Women in Black by broadcasting short videos about actions dedicated to the problem of war rape. The celebrations were also attended by activists, as well as women survivors of war crimes from Bosnia and Herzegovina, Croatia, and Montenegro. 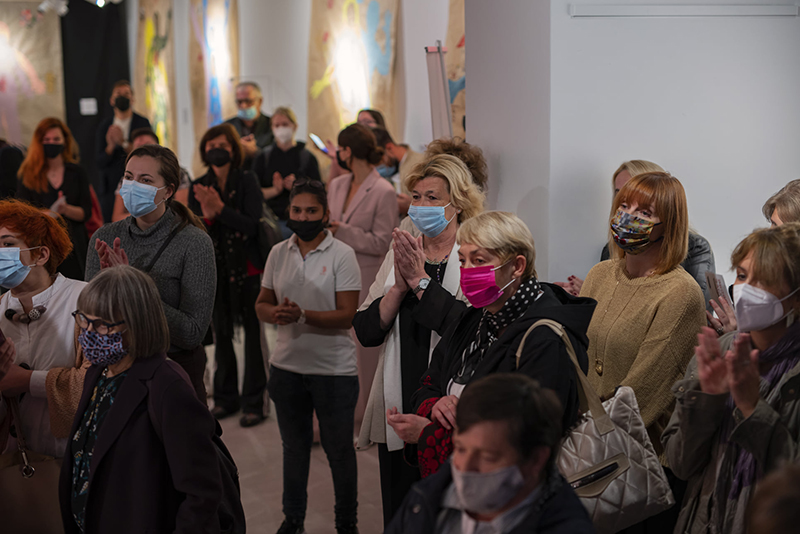 The exhibition "Speaking Out" and other events within the Thematic Week were visited by more than 150 people, mostly human rights activists, but also three ambassadors to Serbia - Shan McLeod, British Ambassador, Annika Ben David, Ambassador Sweden, and Susan Schein, Ambassador of Denmark, and their staff.

The Thematic week was organized within the project "Amplifying Voices of Women Affected by Sexual and Gender-Based Violence in War in the Western Balkans - For a Culture of Recognition and Reconciliation" jointly implemented by the Youth Initiative for Human Rights, Women in Black and the Autonomous Women's Center (Serbia), medica mondiale (Germany), medica Zenica, Vive Žene (BIH), medica Đakovica, Kosovo Rehabilitation Center for Victims of Torture (Kosovo).