Alarm Report on Progress of Serbia in Cluster 1 - November 2021 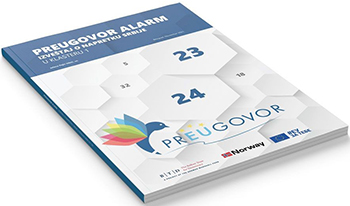 During the reporting period - from May to October 2021 - the implementation of formal activities in certain areas of Cluster 1 continued at an accelerated pace, especially in connection with the constitutional changes in the field of judiciary. These activities are mostly of a normative character, representing only the initial step towards the desired social change, and are still lacking tangible results. The activities are also mostly late and are compensating for the processes that should have been completed a few years back. As part of the civil society, Coalition prEUgovor is still not satisfied with the quality of the process of drafting laws, strategies and policies, or the resulting solutions.

The way in which the activities are carried out, their dynamics and the official narrative that accompanies them confirm the earlier impression that this is actually a “ticking-of-boxes” approach that seeks to create a picture of progress that will be sufficient to open new clusters in Serbia’s accession negotiations with the European Union.

Progress is not visible in critical areas monitored by the prEUgovor coalition, such as media freedom and the fight against corruption and organised crime. In addition to these, the European Commission regularly emphasises obstacles regarding the domestic handling of war crimes and public administration reform, which cannot be viewed in isolation from the (non)functioning democratic institutions. Poor performance in all above-mentioned areas has been reiterated, albeit in a milder tone, in the recently published annual report on Serbia, the first that was prepared based on the new enlargement methodology. Still, the European Commission recommended opening two new clusters in the accession negotiations with Serbia. PrEUgovor reminds that the last negotiation chapter was opened at the end of 2019.

The report on the coalition's pre-agreement can be viewed and downloaded HERE.