In its new annual Reform Agenda the prEUgovor coalition provides a short overview and recommendations in regard to key issues to be addressed in 2022 in the EU accession process of Serbia. 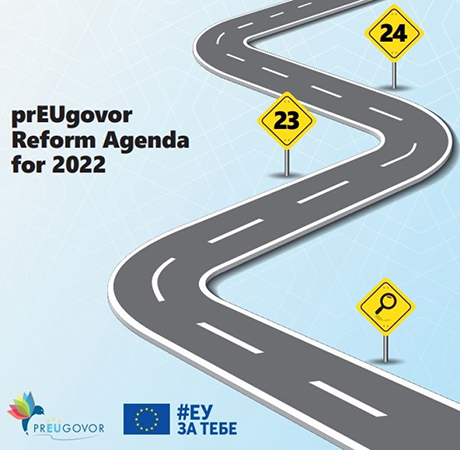 Although the European Commission has recommended the opening of two clusters with Serbia and, together with the Serbian government, has emphasised the country’s positive reform efforts, its October 2021 annual report indicated that only limited progress has been made in most chapters. Overall, in that regard, the assessment is worse than in previous years. According to the report, the results were lacking in critical areas such as judicial independence, fight against corruption, freedom of the media, and the fight against organised crime - the areas monitored by the prEUgovor coalition - as well as in handling war crimes and public administration reform. In its two resolutions, from the spring and winter of 2021, the European Parliament was more critical in assessing the state of democracy and the rule of law in Serbia, and reflected on specific incidents and highlighted cases.

Notes with regret that the establishment of the Ministry of Human and Minority Rights and Social Dialogue has not significantly contributed to the improvement of the culture of dialogue, which has remained “trapped” at numerous meetings without impact on other spheres of political and social life. The realisation of this role was negatively affected also by the fact that the Ministry publicly stated that it is not responsible for resolving pressures and attacks on civil society, as a result of which it could hardly be considered an adequate mechanism for creating conditions for democratisation. However, if this Ministry should continue to operate, it is necessary to implement the “binding actions” defined at the social dialogue meetings, or assign them to another ministry. Also, additional efforts are needed to improve the efficiency and sustainability of the adopted strategic documents, and action plans as their weakest components.

In the field of combating violence against women, PrEUgovor recalls the need to amend the Revised AP 23 in the part concerning amendments to the Criminal Code in order to bring it in line with the Istanbul Convention, in accordance with the European Commission’s conclusion. PrEUgovor expects the elimination of the inadmissible influence of individuals in power and the media on the creation of attitudes and the prosecution’s investigation of all the scandals involving the sexual abuse of minors and women that opened last year, as well as the future ones. The Coalition also recalls that there are still no accessible and geographically well-placed general and specialised support services for victims of violence that enable their recovery, empowerment and independence, and that there is a serious delay in amending the law and the development of a new strategic document in the field of social protection, which would regulate this area in accordance with international standards. It is also necessary to ensure full implementation of measures in the field of sexual and reproductive rights and women’s health, not as a matter of birth and population policy, but as an integral part of their human rights, in accordance with recommendations the country has received from the competent international bodies.

Read in more detail in the prEUgovor Reform Agenda for 2022 HERE.