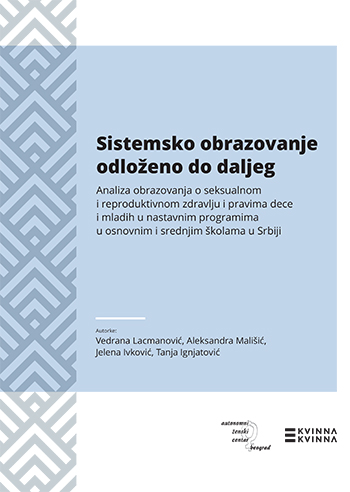 Education about reproductive and sexual health and rights has not been organized systemically, shows the latest study of the Autonomous Women's Center "Systemic education postponed until further notice", which analyzes how much the Republic of Serbia respects international standards, domestic laws and policies regarding the education of children and young people about sexual and reproductive health within the framework of the formal education system.

An overview of the curricula for primary and secondary schools shows that it is difficult to conclude in which way the subject of sexual and reproductive health and rights is dealt with in formal education, i.e., to what extent the recommendations stipulated in national and international documents in this area have been adopted. There is a noticeable lack of content concerning functional emotional relationships and partnerships outside the context of family planning, prevention of gender-based violence, as well as reproductive rights and freedoms.

Young people enter sexual relations physically and mentally unprepared, and due to ignorance, most of them do not use contraceptives, which is why they are in the lead among their peers from Europe in terms of the number of sexually transmitted diseases and intentional terminations of pregnancy. Young people cannot count on counseling in health centers, because such programs are rare, and they cite the Internet, parents and peers as sources of information. However, research shows that young people and their parents believe that it is necessary to carry out education from an early age and that it should be part of the regular education system.

Bearing in mind the significant role of educational institutions in promoting acceptable values and behavior, and on the other hand, the threat to the health and rights of young people, the lack of political will to implement laws and policies in the field of education on reproductive and sexual health and rights is worrying.

You can read the analysis HERE.